I Can Post Articles on My Blog Again!  My last blog post was on June 16th.  The next day Comcast hooked up the last leg of my Triple Play package, and I dutifully logged in to mlblogs.com, went to “My Profile” and followed the instructions for changing my email address.  I blythely hit the “Submit” button.  I’m not much of a techie so I felt a real sense of accomplishment.

A couple of days later, I decided to post a new article on my blog and logged in using my new email and password.  Up came an error message that stated in angry red:  “Authentication Error:  Email and/or password invalid.  Try again.”  Hmm.  Maybe the change didn’t go through, so I tried to log in using my old email address and password.  Same result.  I tried other email and password combinations to no avail.  Oh no, I couldn’t log in.  Disaster!  I can’t post any more articles?

I quickly emailed mlblogs.com and explained my plight.  To make a long story short, after 3+ weeks of emails and phone calls back and forth to 4 or 5 different people, most of whom kept telling me to log in using the old email address (which I kept telling them I couldn’t do), I found Jacob Wilson who understood what happened.  Bless his heart, he imported my blog with all prior articles, comments and photos into my new email account.  So I am back and writing again on all things A’s.

The A’s Team We Were Hoping Has Finally Showed Up!  Wow, the A’s won a series, and against the Tigers, the AL Central’s leading team.  Yahoo!!  I attended Monday night’s 7-1 victory in which Brett Anderson pitched scoreless ball into the 6th inning, when he walked two. 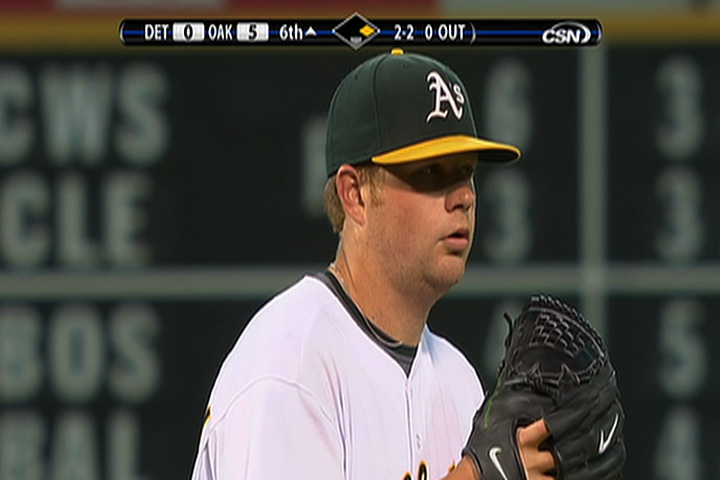 The usually-reliable Michael Wuertz came in and gave up a double to Gerald Laird to score one of those walks, marring Brett’s great outing.  The A’s bats came alive in the 4th inning when Matt Holliday singled and Jason Giambi walked.  Kurt Suzuki doubled in Holliday and Ryan Sweeney singled in the G man, giving the A’s the lead for good.  The guys added on the rest of the  runs in the 5th and the 6th inning,

highlighted by Mark Ellis’ first homer of the year, a two-run blast, and another two runs on Sweeney’s 3rd of the season.

Small ball added the last run in the 8th.

Yesterday produced a 5-1 win to give the A’s the series win over Detroit.  Highlights included Dallas Braden
pitching 7 innings of 5-hit, 1-run ball,
followed by 2 shutout innings from Brad Ziegler who now has the set-up role,

and Andrew “Daily” Bailey, the team”s closer to everyone but Manager Bob Geren.
The day’s offensive fireworks came on 2 homers from Jack Cust (14)
and Jason Giambi (11)

scoring 4 runs between them.  Detroit’s only run came in the top of the 2nd on a double from Gerald Laird, driving in Ryan Raburn who had singled.

I like this team.  I hope they continue to show up.  Maybe the much-hoped-for warm weather has finally arrived.