Rickey Records:  I had forgotten how much I loved Rickey Henderson.  I was present when he broke Lou Brock’s previous stolen base record (938 swipes) 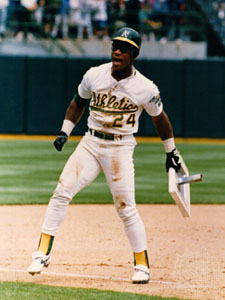 and then put the new record completely out of reach by increasing it to 1046, a number that most people in baseball say will never be seen again. But he holds some other records that don’t get as much ink as breaking Lou Brock’s record: he has the most lead off homeruns in history (81) and the most stolen bases in a single season (130).  Rickey scored 2,295 runs  in his career (the most by any player), and he is in the top five in several other categories.

He truly is the best lead-off hitter of all time and the best  player in A’s history.  It was a thrill to be present while he experienced the greatest recognitions a player can receive in the sport of baseball–induction into the Baseball Hall of Fame on July 26th and the retirement of his number 24 at the Oakland Coliseum August 1st.

Hall of Fame Trip:  I was fortunate to travel with Sports Travel and Tours on their Induction Plus trip last week.  We attended A’s games in the new Yankee Stadium, Fenway Park and Citifield,  the new home of the NY Mets.  (More on these ballparks in a future post.)  But the crown jewel of the adventure was two days in Cooperstown, NY,  to watch Rickey Nelson Henley Henderson be inducted into the Baseball Hall of Fame.  In case you are wondering, he was named after the singer/actor son of Ozzie Nelson.

Four years ago, my husband and I had visited Cooperstown, and found a sleepy historic town

on the edge of beautiful Lake Otsego in upstate New York,

where the sidewalks rolled up when the sun went down.  It was blissful then, having the Hall of Fame to ourselves for a few hours,

to tour slowly around the Gallery, reading about each Hall of Famer on the bronze plaques which are displayed along the walls in the order in which each player was inducted into the Hall of Fame.  A few years earlier, the Hall had built a large addition, part of which added a rotunda at the end of the Gallery to accommodate new additions to the Hall.

But on this 2009 trip, we arrived in Cooperstown on Friday, July 25th, to overcast skies and hordes of people clogging the streets.  No solitude was to be found in the Hall of Fame either, which is as it should be on Induction Weekend.  Parents pointed out to their children the plaques of the players the dad or mom had loved when they were young.  Others stood reverently in front of the bronze images of Babe Ruth, or Lou Gehrig or Ted Williams.

Rickey’s plaque site in the new rotunda was empty as his bronze wouldn’t be installed until after the induction ceremony the next day.

That same afternoon we went to the Clark Sports Center for the “Connecting Generations” event.  It was a lot more fun than I anticipated.  Three Hall of Famers

–former A’s manager, Dick Williams, Ryne Sandberg, and Goose Gossage–competed against four families from the audience in a Family-Feud-style baseball trivia contest.  The Hall of Famers won by a small margin and the audience learned some things about the greats of the game.  Harold Reynolds charmingly emceed the event.  I did pretty well answering the questions along with the contestants.

I’ll stop here for today.  This is part of a long article which I will give you installments over the next few days.  There is just too much to share with you in one post.