I have been MIA on this blog since May 1st.  Can it really be that long?  I was preparing for and attending my major landmark high school reunion in Western Massachusetts.  Every day I would say to myself:  I have to put up a new blog post, but I was far behind where I needed to be in the preparations for the reunion and it didn’t get done.  Well, I’m home now and plowing out from under 3 weeks of life’s other demands that also got put on hold since May 1st.  But I’m back and ready to write on all things A’s.

Jason’s Got His Groove Back: Jason Giambi has finally started doing the main thing the A’s wanted him to do this year:  take some of the pressure off the VERY young starting rotation by hitting homers and driving in runs. Yesterday (Saturday) he stroked his 400th long one and went 2 for 5, scoring 2 runs. He got a standing O from the fans and came out for a curtain call to a huge cheer.  Welcome back, Jason!

Garciaparra is Back too: Nomar Garciaparra, who came off the DL a few days ago, matched Jason’s line exactly yesterday.  He loves to swing the bat and rarely misses an opportunity when the pitch is anywhere near the strike zone.  We’re happy to have him back too, ticks and all.

The Planets Are Aligned:  The A’s got everything they wanted today.  Josh Outman pitched into the 8th inning, giving up only one run in the 1st, and saving the tired bullpen who pitched 6 innings last night.  The bats also did their part with Landon Powell hitting a 2-run blast in the 6th to put the A’s ahead 3-1. 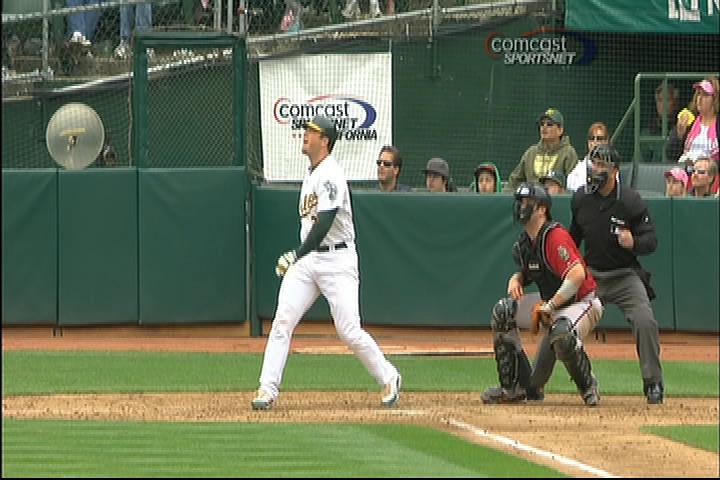 Landon gave Kurt Suzuki the day off, even though he pulled his hamstring on Monday.  After he hit the dinger, he tired not to limp (unsuccessfully), bringing back memories of Kirk Gibson’s infamous limp around the bases after his homer off Dennis Eckersley in the World Series. Is that a grimace of pain on Landon’s face above?

In the 7th, Jason Giambi hit a monster blast extending the A’s lead to 4-1.  He definitely didn’t gimp but looked like he had just shed 10 years as he sprinted around the bases.